Looking for the 2021 Digital Projects Showcase? 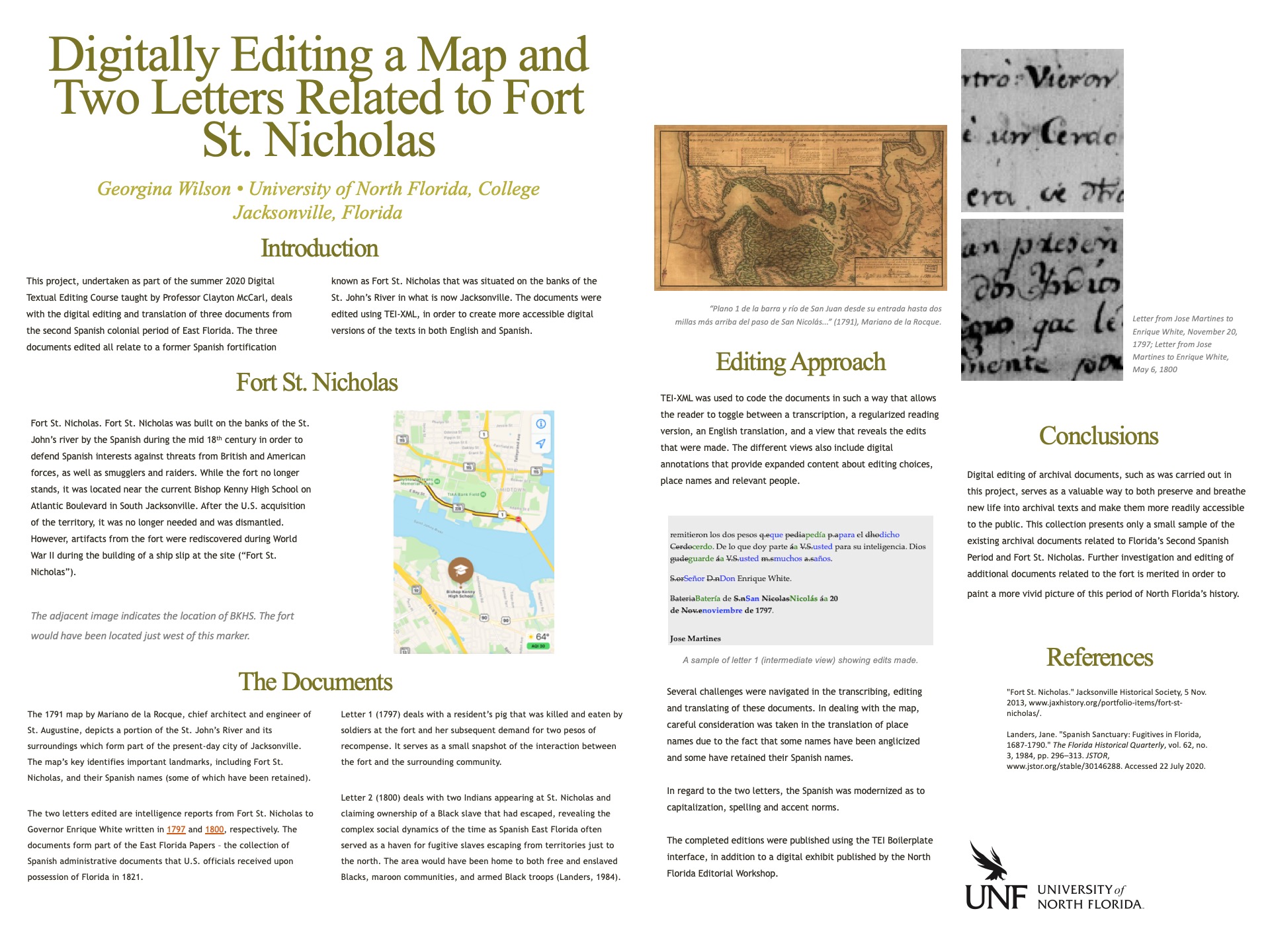 This project deals with the digital editing of three archival documents from the second Spanish colonial period of East Florida. The project was undertaken as part of the summer 2020 Digital Textual Editing course at UNF taught by Professor Clayton McCarl. The documents edited consist of a 1791 map and two letters, written in 1797 and 1800, related to a former Spanish fortification known as Fort St. Nicholas located in what is now South Jacksonville. These documents shed light on the strategic value of the Jacksonville area during the Spanish colonial period, as well as some of the complex social and racial dynamics of Spanish East Florida. TEI-XML coding was utilized in order to create accessible digital versions of the texts along with English translations.
Research Types: Undergraduate Research

This digital editing project was undertaken as part of the summer 2020 Digital Textual Editing course at UNF taught by Professor Clayton McCarl. The objective of the course was to introduce students to the world of documentary archiving and TEI-XML digital editing.

As a Spanish major, I chose to do a bilingual project for the course and edited three documents, a map and two letters, related to a former Spanish fortification called Fort St. Nicholas. While the fort itself no longer stands, it was located near what is now Bishop Kenny High School in South Jacksonville. Because St. Augustine was the capital of Spanish East Florida, Fort St. Nicholas here in what is now Jacksonville, would have served as a northern defense against English or American forces as well as smugglers and raiders. When Florida became a U.S. territory, the fort fell into disuse, but artifacts were discovered during World War II during the building of a ship slip at the site. The digital map on my poster indicates the location of Bishop Kenny High School – the fort would have been just west of the athletic field.

The archival documents that I worked with were a map and two letters related to the fort. The map was designed in 1791 by Mariano de la Rocque, chief engineer and architect of St. Augustine at that time, who also worked on important projects such as the renovation of the Castillo San Marcos, the St Augustine Cathedral Basilica and the San Francisco convent in St. Augustine. Other maps of his can be found in the University of Florida’s digital collections. The map depicts important Spanish landmarks in what is now Jacksonville. It includes a detailed key with the Spanish names of these places, some of which have been retained to this day (such as San Pablo).

The two letters edited are intelligence correspondences from the fort to Governor Enrique White (the longest-serving governor of Spanish East Florida). They are part of the East Florida Papers, the collection of Spanish administrative documents that the U.S. received upon acquisition of the Florida territory. These documents are housed at the Library of Congress, but digital access was provided by Dr. James Cusick of the P.K. Yonge Special Collections Library at the University of Florida, which houses microfilm copies.

The first letter, from 1797, deals with a resident’s pig that was killed and eaten by soldiers at the fort and her subsequent request for compensation. The second letter, from 1800, deals with two Indians who arrived at the fort looking for their escaped Black slave. Spanish Florida often served as a haven for fugitive slaves escaping from plantations just to the north, who could petition for their freedom once they reached Spanish territory. This letter provides a snapshot into the complex social and racial dynamics of Florida at that time; Spanish Florida was home to free Blacks, enslaved Blacks, Black and Indian maroon communities, armed Black militia troops and various types of inter-ethnic societal relationships.

As to the process of editing the documents, TEI-XML coding was used to transcribe, edit and translate them in order to produce a digital product that readers can view in several different versions. There is a transcription of the handwriting, which can be challenging for many modern readers, a reading version in which the text is regularized for accessibility, an English translation, and a view that reveals the edits that were made to the original. The different views also include annotations throughout that provide context for certain editing choices or relevant historical background info.

While editing the map, careful consideration was taken as to which place names to translate and which would still be recognizable in their Spanish forms. The map also posed a challenge as far as it’s layout in relation to the limitations of the server used to publish the digital editions. As for the letters, the Spanish was modernized for capitalization, spelling and accent norms. Because the letters contained little punctuation, punctuation marks were carefully added in the reading version in order to enhance readability but also retain the original meaning of the correspondence.

The completed editions were published on www.unfdhi.org using the TEI Boilerplate interface and a digital exhibit, including an introduction to the project, was published by the North Florida Editorial Workshop and is also available on their website.

This project is just one example of how digital editing tools can help to preserve archival documents while enhancing their accessibility to readers and researchers. The various views help expand the reach of the documents to a variety of readers and the annotations can serve as helpful tools or “jumping-off points” for researchers. The building of a digital exhibit can also help present a historical narrative that can open the door to deeper investigation into a given subject. The documents in my project were just a few of the many other archival documents related to Fort St. Nicholas that are available in the East Florida Papers and perhaps beyond. Therefore, this project could easily be expanded upon with the editing and translation of additional relevant documents. TEI-XML editing can and should also be used to work with a broad variety of historical documents for which accessibility might be enhanced.

Back to All Posters